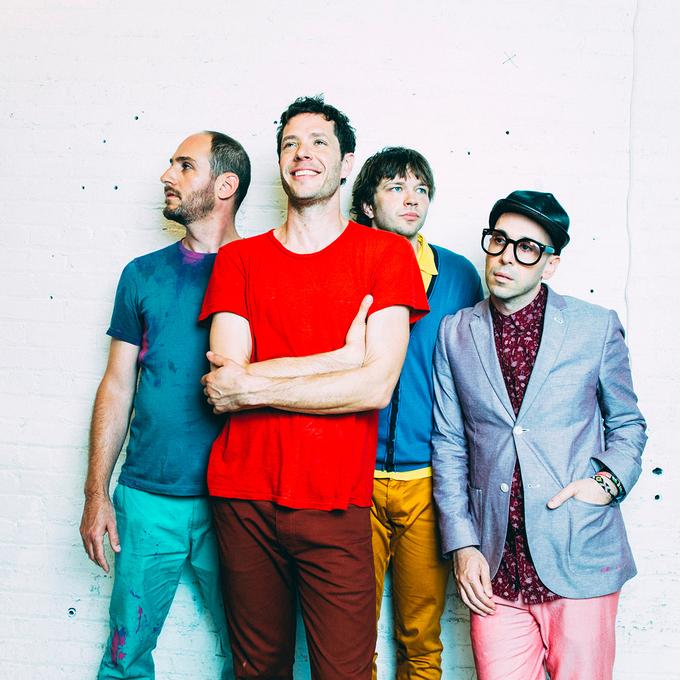 Formed as a quartet in Chicago in 1998 and relocated to Los Angeles three years later, OK Go (Damian Kulash, Tim Nordwind, Dan Konopka, Andy Ross) have spent their career in a steady state of transformation. The four songs of the all-new Upside Out EP represent the first preview of Hungry Ghosts, due out in the fall on the band’s own Paracadute. This is the band’s fourth full-length and the newest addition to a curriculum vitae filled with experimentation in a variety of mediums.

The band worked with longtime producer and friend Dave Fridmann (Flaming Lips, Weezer, MGMT), while also enlisting a new collaborator in Los Angeles, veteran Tony Hoffer, (Beck, Phoenix, Foster the People) to create their most comfortable and far-reaching songs yet. Building on (and deconstructing) 15 years of pop-rock smarts, musical friendship, and band-of-the-future innovations the EP, Upside Out, offers a concise overview of forthcoming Hungry Ghosts’ melancholic fireworks (“The Writing’s on the Wall”), basement funk parties (“Turn Up The Radio”), IMAX-sized choruses (“The One Moment”), and space-age dance floor bangers (“I Won’t Let You Down”).

Drawn from the same marching orders issued to big-hearted happiness creators as Queen, T. Rex, The Cars or Cheap Trick, and a lifetime of mixed tapes exchanged by lifelong music fans, Upside Outis a reaffirmation of the sounds and ideas that brought the band together in the first place. The four songs provide an assured kick-off to a new sequence of interconnected performances, videos, dances, and wild, undreamt fun.

“As the band has evolved over the last 15 years, the creative palette we work with has expanded in so many unexpected and gratifying directions,” says frontman Damian Kulash. “This record feels like it’s the musical manifestation of that — like we can speak in a clearer voice when we are playing in a bigger sandbox. Just as the band’s whole project became clearer to us as we learned to find more homes for our creativity — we triangulated it from more directions. And, I think the music itself has gotten more focused for similar reasons. We went in with fewer preconceptions of who we are or what our sound is, and came out with a record that sounds much more uniquely our own because of it.”

Continuing a career that includes viral videos, New York Times op-eds, a major label split and the establishment of a DIY trans-media mini-empire, collaborations with pioneering dance companies and tech giants, animators and Muppets, OK Go continue to fearlessly dream and build new worlds in a time when creative boundaries have all but dissolved.