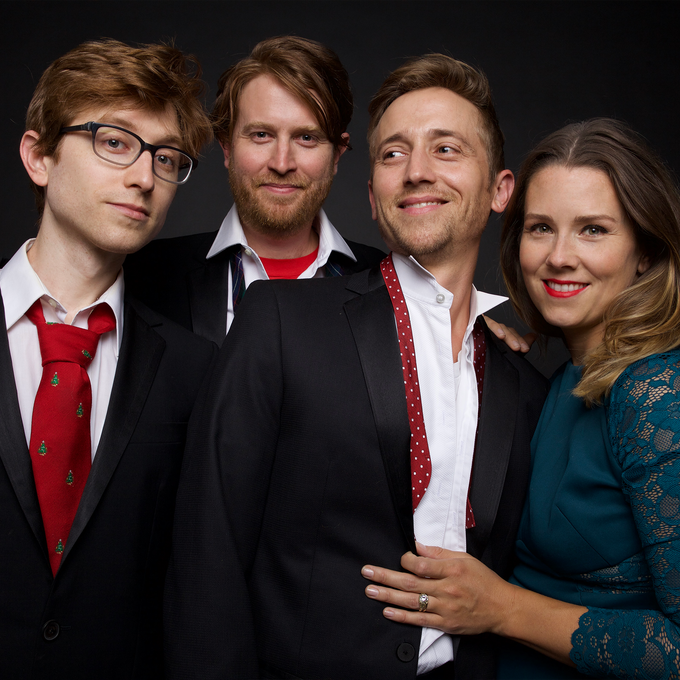 The Gregory Brothers are Michael, Andrew, Evan, and Sarah Gregory. In their series Autotune the News and Songify This!, they make songs out of stuff that wasn’t intended to be a song. The State of the Union Address can become a booty jam and a local news report might be a club hit, through what The New York Times calls “a combination of old-fashioned musical ability, high-tech skills and the do-whatever-you-want spirit of the World Wide Web.” Their YouTube channel, schmoyoho (accent on the “yo”) has over half a billion views.

The Gregory Brothers' unique musical and comedy stylings began when baby Evan, Michael, and Andrew created hilaaarious cassette mixtapes in their living room in Radford, Virginia. Man, they really cracked up. These seminal works are now sadly lost despite the best efforts of our nation’s paleontologists.

In 2007 they rejoined forces to tour as a band, adding the prodigious talents of Evan’s now wife, Sarah, who left her budding career in paleontology due to being too good a singer. Shortly thereafter they discovered their calling as songification scientists, calling forth from the depths of the internet the universe’s greatest unheard melodies. To this day, The Gregory Brothers create music and video to the delight of humans everywhere.

“The Gregory Brothers are unlikely salvagers of our modern digital wasteland."
-The Village Voice

FAQ:
Q: Are they really brothers?
A: Michael, Andrew and Evan are really brothers.
Q: But wait, one of them is a giiirrrl.
A: Evan and Sarah are married. That makes Andrew and Michael Sarah’s brothers-in-law.
Q: Are The Gregory Brothers Jewish/Mormon/Republican/rich?
A: None of the Gregorys are Jewish/Mormon/Republican/rich.
Q: zomg michael is soooo adorable and HOT xoxoxooo will u marry me!!!!
A: Yes.